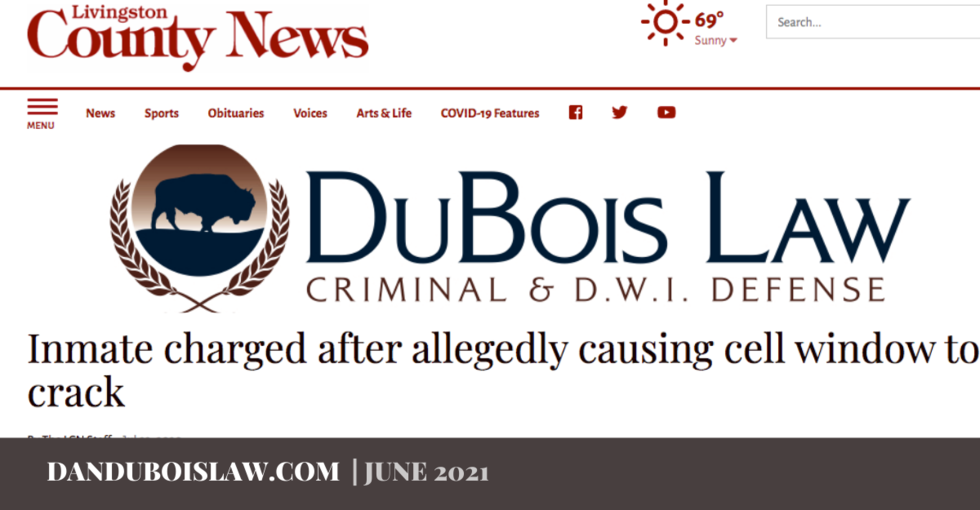 Geneseo NY- Back in July of 2020, a client was being housed in Livingston County Jail in Geneseo NY and speaking to Sherriff's Corporal Brenda Clark about a pair of sneakers in his property. According to Livingston County News, the defendant then head-butted the window of his assigned cell, causing the window to crack. The cost to repair the cell door was $820, according to the Sheriff's office.

Following the incident the defendant was moved to the Central Booking area at the jail for processing and issued an appearance ticket on the charge. As an unsentenced inmate, the defendant was being held on an alleged violation of probation.

Despite video recording of the damaging of the window at the jail, a Livingston County jury agreed with DuBoisLaw that the District Attorney's Office and the "System" in general were wrong in charging the Defendant with Felony crimes for his actions that day.

The Jury found the defendant Not Guilty of all charges after a trial last week.

Our client was facing a substantial prison sentence. The jury deliberated for approximately 36 minutes before coming to their decision on the verdict.

It's always vital to turn to a criminal defense attorney who will go the extra mile and hear all sides of the case. Having spent time on both the prosecution and defense side, Dan DuBois is prepared to take any defense case on, and help you win.