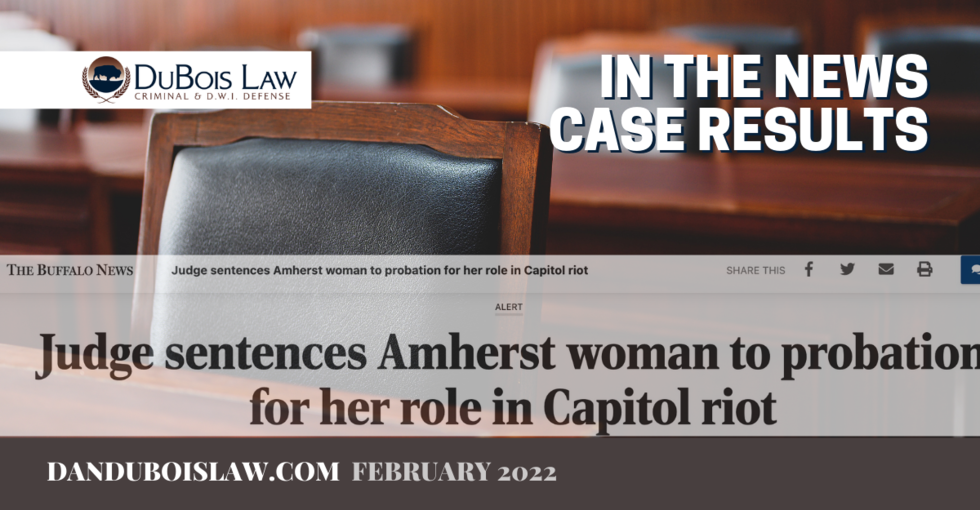 According to the Buffalo News, more than 750 defendants have been arrested for their roles in the events that occurred at the capitol on January 6 of 2021.

The events that occurred on January 6 have landed many individuals in a position that surely were not originally intended by their initial decision to attend the events in Washington that day. Recently one individual who was in attendance on January 6 was sentenced to three years of probation, 30 days of home confinement, and $500 restitution.

Though this outcome is not something that anyone would ask for willingly, it was a more positive outcome than what the defendant was facing. When an arrest is made predicated on facts, the facts must be presented in court to determine the outcome and sentence. Like any legal case, a defendant is entitled to defend themselves in court and is considered innocent until proven guilty.

There were facts presented by the prosecution that provided some evidence of wrongdoing on behalf of the defendant.

Despite all of these provided facts, ultimately the judge was able to take several key factors into account.

“There are legal reasons why I'm not going to impose a period of incarceration and probation, but actually I think that recommendation does make sense in this case,” said U.S. District Court Judge Christopher R. Cooper.

The defendant recognized her actions, along with acknowledging her guilty plea.

When asked if she still stood by her plea,

“I do have remorse for how my actions were that day.” and when asked if she did the things that she admitted to in court, she reiterated, “Yes, Your Honor.”

Despite the prosecution's evidence and case, they did credit the defendant with not engaging in violence, theft or destruction during her roughly 30 minutes inside the Capitol.

Attorney Dan DuBois had this to say about the defendant in closing.

Judge Christopher Cooper had this to say on why he chose the sentence.

“In light of her statements for being there because ‘my POTUS called me to be there,' it seems to me those facts warrant a period of probation or supervision to ensure that she is free from these sorts of influence going forward.”

These stories are available through News stories locally here in WNY. Past outcomes do not guarantee results. In the event that you have a question about a criminal case against you or someone you know, please contact Dan DuBois via our contact form or by phone. We will help you best understand the process and remember, we understand, we never judge.