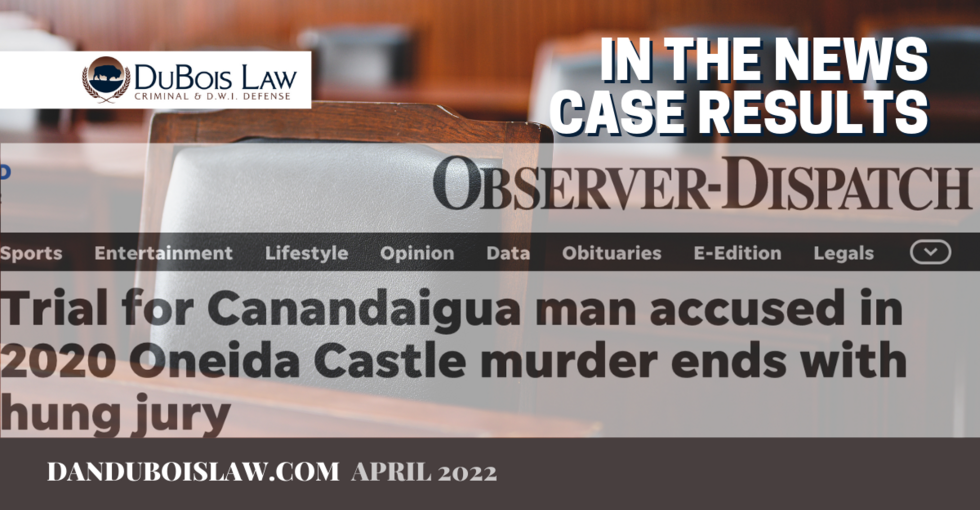 Back in August of 2020, 22-year-old Tyler McBain was murdered during a robbery in Oneida Castle. 2 men were charged for their participation in the events that occurred that day. One individual, who has been charged and convicted, was the individual who was inside the home of the victim and was observed leaving the residence with a tote full of marijuana products. The other is the subject of today's story and our client.

The second individual involved is our client, who was charged with felony second-degree murder, and first and third-degree robbery, both felonies. Despite his relative involvement with the case, a jury last week was unable to reach a verdict on his guilt for his involvement in the case.

According to the Utica Observer-Dispatch, the trial lasted over a week, with more than 30 witnesses testifying. Jurors deliberated for two days, sending out notes asking for “the definition of criminal liability for someone else's conduct” and stating they had reached a deadlock.

Dan DuBois was quoted on this subject, courtesy of the Observer-Dispatch,

"We clearly know he wasn't the individual who went upstairs," DuBois said. "The issue is did (he) know what was going to happen?"

When faced with charges of this magnitude, it's vital to find representation who will go the distance for you, and find the crucial details that can make or break your case. This case is not over, as a mistrial means a new trial, which will occur sometime this year, but this was a monumental step toward proving our client was not guilty of homicide. Past results do not guarantee outcomes. If you or someone you know is in need of a criminal defense attorney, please don't hesitate to call or reach out via our contact form. We understand. We never judge.