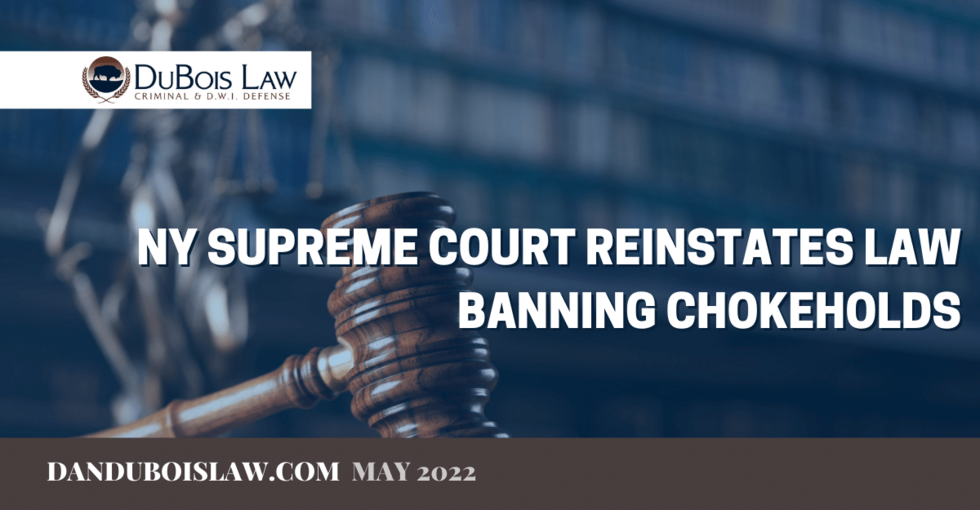 On Thursday, May 19th the New York Supreme Court reinstated a law that was struck in June 2021. The law had banned police officers from using chokeholds and other moves that compress someone's diaphragm during an arrest.

The ruling in June of 2021 by the state Supreme Court deemed the law “unnecessarily vague” and struck it entirely. In 2020 a grouping of police unions brought the lawsuit forward. NYPD officials argued that chokeholds were already banned by policy and that training dictates a subdued person should be seated upright for proper breathing.

New York City Council approved the law in 2020 in the wake of the death of George Floyd, who died following his neck being knelt on for over 9 minutes by an officer.

It was argued that it would be difficult for officers to determine whether their actions restrict the diaphragms of others. The appellate court stated that the effect of their conduct could still be reasonably determined. The court's decision was also supported by the NYPD's internal policies, citing proof they show that officers can implement the law.

Part of the decision reads “That (the NYPD policies) are stricter than the statute itself – prohibiting any sitting, kneeling, or standing on an individual's torso regardless of the effect – is not proof that the diaphragm compression language is incapable of being understood”

What does this mean?

The issue is likely to still be fought over, so everything isn't settled, but for the layperson not much actually changes. Especially for those in the NYC area, whose officers are held by a stricter internal policy than the law states.

Hopefully, this ban and related internal policies have their intended effect and the number of people that are harmed and/or die as a result of police interactions diminish. If you feel like your rights have been infringed in a stop or arrest, you need to contact an experienced defense attorney as soon as possible.

DISCLAIMER: PAST RESULTS DO NOT GUARANTEE FUTURE RESULTS, AND THE OUTCOME OF YOUR PARTICULAR CASE OR MATTER CANNOT BE PREDICTED USING A LAWYER'S OR LAW FIRM'S PAST RESULTS. EACH CASE IS UNIQUE AND SHOULD BE EVALUATED THROUGH A PHONE CALL OR MEETING WITH DANIEL DUBOIS, WITHOUT COMPARISON TO OTHER CASES WHICH MAY HAVE HAD DIFFERENT FACTS AND CIRCUMSTANCES

Here at DuBois law, we understand, we never judge. Facing any charge can be a stressful endeavor, so you need the best criminal defense lawyer around. That's where we come in. Daniel DuBois has been representing clients for 20 years in New York state and his excellent work has earned him numerous recommendations from previous clients, check them out!

Don't forget to check out our blog regularly where we post legal news and other snippets of law information. You can also see coverage of clients in the news!

Remember, this blog does not publish legal advice. For that you need to contact a properly experienced local attorney. This blog posts available information to lead to an informed public.