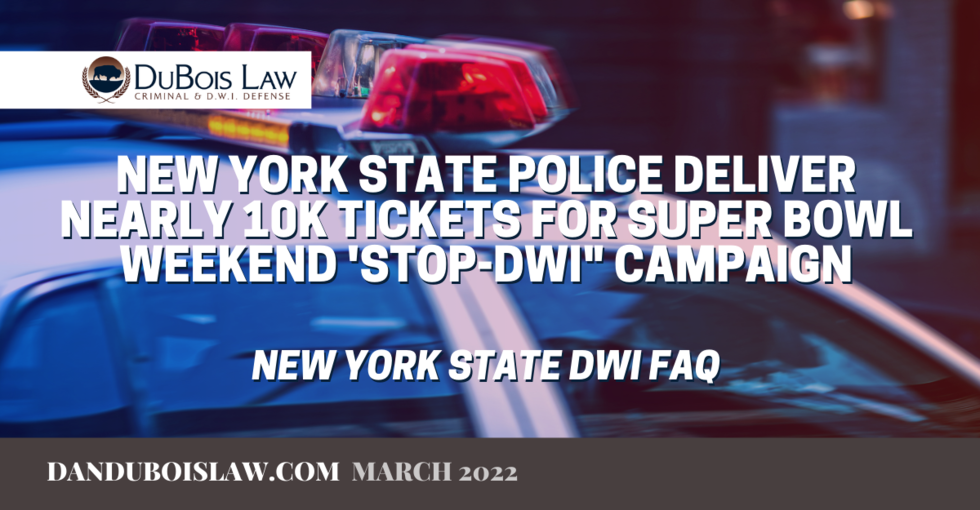 Working with individuals here in the Western New York area who have found themselves on the wrong side of the law is something we work hard at. Understanding that each case is different, we aim to help people here in WNY and all over New York State better understand some of the legalities surrounding drinking and driving. "We understand. We never judge." is our motto. We understand the law from the defense side, having worked in prosecution as well during a career here in Buffalo. Today's blog summarizes a recent press release from the New York State Police on the 2022 Super Bowl Weekend campaign emboldened by "STOP-DWI" , an attempt by legislators to crack down on infractions.

Here's what was detailed in the report from the NYS Police.

What is the "STOP DWI" Campaign?

STOP-DWI stands for "Special Traffic Options Program for Driving While Impaired." Created in 1981 by state legislature, the organization coordinates efforts to reduce alcohol and other drug-related crashes. Funded entirely from fines by convicted drunken drivers, no tax dollars are used. According to the organization's website, it is the only self-sustaining impaired driving program, as well as the nation's first.

From the 11th of February through the 14th, State Police increased patrols and conducted sobriety checkpoints to deter, identify and arrest impaired drivers. During that time, 529 accidents were investigated, which resulted in 64 people being injured. 180 individuals were arrested for DWI. Beyond the DWI arrests in New York, the State Police provided a sampling of the total tickets issued, which paints a picture of how many tickets are given out every day, and throughout the year.

The total number of tickets issued during the Super Bowl STOP-DWI initiative was 9,978. Comparatively, in 2021, there were 8,923 tickets and 140 people arrested for DWI.

Arrested for DWI in New York?

If you or someone you know is ever in a situation involving a drinking and driving arrest, it's important to know that the right (or wrong) attorney can impact the amount of money you end up paying, in addition to the penalty enforced by the judge. When you find yourself in trouble with DWI, DUI, or DWAI, it's vital to find yourself a good attorney who is trustworthy, timely, and cares about your case. You can count on Dan DuBois to go the extra mile to ensure the best result possible. For more information on working with Dan simply fill out our contact form or give us a call to ask any questions, you may have.