As Summer Heats Up, So Do DWI Arrests in NY State 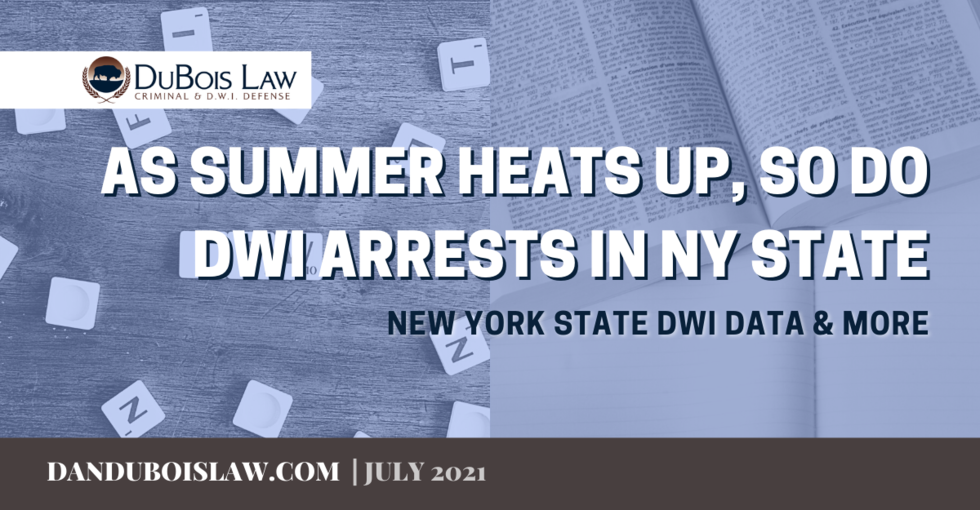 Our summers in Buffalo NY are short, and people of WNY tend to maximize getting the most out of the warm seasons. Summers are full of family gatherings, picnics, and included in those things...consuming alcohol. Now that Marijuana laws have changed in New York State you may have found yourself being offered weed amongst the other typical temptations this summer. As we all know, temptation comes with repercussions and many young adults in New York State find themselves involved in DUI and DWI offenses as a result.

DUI and DWI Numbers From The New York State

DUI and DWI offenses are generally on a rise throughout the summer, and they have seen a hike since the recent legalization of marijuana in the state. A recent survey from the American Automobile Association, for instance, revealed that the individuals driving after using both alcohol and cannabis are at a greater risk for themselves and for others.

“They're more apt to run a red light or be aggressive on the road or speed,” said Elizabeth Carey, a spokeswoman for AAA Central and Western New York.

Authorities certainly are watching things closely and, according to the Governor, State Police will crackdown against drivers who might have taken too much to drive legally and they'll be charged with DUI and DWI offenses.

"With all that we've been through over the last sixteen months, we certainly want New Yorkers to have fun this holiday weekend and celebrate, but we also want them to do so responsibly," Governor Cuomo said. "Getting behind the wheel while impaired is a choice that often ends in tragedy. Make the right choice this year and plan ahead for a sober and safe ride home." ~Andrew Cuomo

The holiday crackdown from the New York State Police that began on Friday, July 2, and ran through Monday, July 5 resulted in police issuing 10,238 tickets. There were 195 DWI arrests while NYS police investigated 648 crashes, including two deaths. The numbers from last year for the same period show that 8,214 tickets were issued while 180 arrests were made by the NYS police on DWI charges. DWI drug related arrests are on the rise already in 2021 with a169 arrests compared to 172 arrests in 2020 and 121 drug relates DWI arrests  in 2019.

New York State Is At High Risk Throughout The Summer

While Governor Cuomo has pinpointed only the weekend of the fourth of July in his recent statement, the New York State is at high risk throughout the summer.

A recent study shows that the consumption of alcohol has increased in the state for almost everyone since the COVID-19 outbreak. On top of that, the recent legalization of marijuana in the state and the numbers of DUI and DWI cases seem to have erupted. Many young adults are indulging in marijuana and alcohol use and the rate at which these drugs were consumed in the state has increased significantly.

Summer 2021 is already seeing an increase in DWI offenses reported, and if you have been involved in such an instance, you should get in touch with DuBois Law right away. They won't judge and will completely understand your situation to file a solid defense for you. You'll be in safe hands!

Getting arrested is stressful. Call DuBois Law today at 888-68-48589 (888 NT-GULTY) for a FREE consultation. You can also fill out a contact form if you don't want to pick up the phone. You want the best defense attorney in New York on your side, and Daniel DuBois is that. Check us out in the news and from client testimonials! Stay up to date with our blog for more posts like these.  If you need financing help, we have a page set up for you. Do your research and hire the best defense attorney in New York to be on your side.