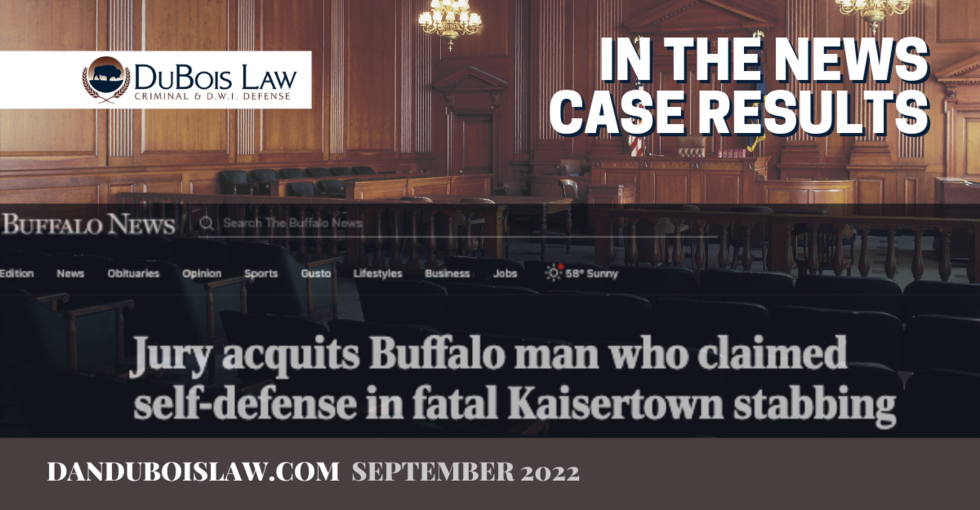 After 2 years a Buffalo man is acquitted of his role in a 2020 fatal stabbing in Buffalo's Kaisertown neighborhood. The client spent two years behind bars awaiting trial. In 2020, he was offered a plea deal that would have left him in jail for a 15-year sentence if he admitted to the manslaughter charge. Shortly before the trial began, he also turned down an offer to plead guilty to manslaughter and serve a 10-year sentence.

On September 13, 2020, our client, David P. Miszko, was charged with killing a 34-year-old man on Spann Street in Kaisertown. The man who was killed was attempting to rob the client during what would be called a drug deal gone bad, and our client acted in self-defense. Prosecutors alleged that the two were fighting and our client pulled out a knife when he lost the upper hand, which would be used to stab the victim.

Our client told a friend that he was robbed and was forced to defend himself, but the police thought he was lying. The victim's girlfriend, who was an eyewitness to the killing, provided at least four different versions of what happened that night. Both prosecutors and our defense team said the victim and his girlfriend had left their home to try and buy drugs, but the victim's girlfriend would go on to say the victim met with the client in order to sell tools. Drugs were found at the scene.

Defense Attornies Kelly Kapperman and Daniel DuBois were able to assess that there was a lack of investigation by detectives. Opening statements were delivered on September 19, and jury deliberations began Friday the 23rd and concluded Monday in the afternoon.

Buffalo Police Detectives had “tunnel vision” and failed to assess the circumstances of the case with an open mind, Kapperman said.

When you are charged with a crime, it's vital that the police and investigation team provide thorough and complete details, as those are the details that can make you guilty, or not guilty. With crimes as serious as murder and manslaughter, it's vital to have representation that is of utmost experience and quality, to ensure you the best result possible.

These stories are available through News stories locally here in WNY. Past outcomes do not guarantee results. In the event that you have a question about a criminal case against you or someone you know, please contact Dan DuBois via our contact form or by phone. We will help you best understand the process and remember, we understand, we never judge.